Skip to content
HomeWhat the Chuck Were We Thinking?

When our beloved dog Daisy had to be put to sleep in December 2013, Mr. Maid and I were devastated. At only nine and a half (human) years old it was way too soon to say goodbye. She was equal parts sweet and snotty, and we loved her.

Unlike a lot of dog owners, we didn’t rush right out to get another pet. We knew at some point we would, but it would take a long time to be emotionally ready. Would we get a puppy again? God, no. Why on earth would we want to go through that again? Don’t be absurd. We’re not insane. Next time, we’d get an older dog.

So, meet Chuck. Yes, he’s a puppy. And yes, we are apparently insane.

To make a long story short, we found Chuck. His pedigree? His Dad is an Australian Shephard Mix and his Mom is a Lab Mix. The word “mix” makes it interesting, because who the heck knows what other genes are swirling around in him.

Oh, he’s cute and all, but puppies are a TON of work. Just ask my blogging bud Christine – we’re going through this at the same time. You can read her hilarious take here.

As a new puppy Mom – one that’s 15 years older than last time – I’ve come to realize the following truths:

There Will Be Blood.

Nipping and scratching is normal puppy behavior. They all go through it until they lose their baby teeth at about five-six months old. Thanks to Chuck’s razor-sharp puppy teeth and claws, my hands and wrist look as if I’ve spent a few days tied up in the trunk of someone’s car. He has plenty of chew toys, but I’m becoming convinced that he simply prefers the taste of human flesh.

In addition to our hands and ankles, everything in the house is suddenly a chew toy. We have had to remove all magazines, books, and knick-knacks from coffee tables. The dishtowel now sits on the counter instead of hanging from the hook by the sink because he pulls it down to chew on it. The paper labels that I didn’t know were on the bottom of the dining room chairs had to be peeled off. I honestly think it would be easier to move into a bare concrete bunker until he is trained.

When it comes to reality TV, dog training shows are as fake as all the rest. I’m sure those professional trainers are great at what they do, but so much happens behind the scenes. They work for hours, days, and weeks with these dogs in environments without any distractions. Just once I’d like to see them try to get a dog to behave while simultaneously cooking dinner, throwing in a load of laundry and answering that important phone call. Or chasing them around the house, trying to corner them so you can pry some forbidden item from their clenched jaws while the UPS man stands at the door waiting for a signature.

Thank God for the crate. If people ever accuse me of treating my dog like a child, I will point out that DCFS would never allow me to put a child in a crate. Not only can we throw Cujo Jr. into this mini-jail when we need to leave the house, cook, clean, or do just about anything else. It also protects us from the little beast so he won’t decide to indulge his craving for human flesh and kill us in our sleep.

Unlike when Daisy was a puppy, I now work from home, so I’m able to focus on house-training. As a result, I’m able to anticipate his need to go outside just by looking at him. It figures that my superpower turns out to be knowing when my dog has to pee or poop. Does this mean he doesn’t have accidents? We’re still working on it.

While I’ve mastered that skill, other tasks have taken a backseat. My house will never again be entirely clean. Not that I was some kind of domestic goddess in the first place but adding a puppy to the mix makes it even worse. No sooner will I vacuum, then tumbleweeds of dog hair start to roll across the floor. And Chuck helps point out exactly how filthy it is. While he is still small enough to wiggle his stumpy little body into corners and under furniture, he comes out trailing dust bunnies in those hard to reach places.

The main thing I forgot about having a puppy is that everything – and I mean EVERYTHING – takes twice as long. It never fails, the pooch who yesterday went outside, went potty immediately and rushed back in, today decides to inventory every bug and blade of grass in the yard. It’s as if he knows you have an appointment to get to. Simple pleasures like sitting down to watch a TV show are nearly impossible. The “pause” button on the remote is nearly worn out due to numerous interruptions for potty breaks, fishing a toy out from under the couch, and grabbing things out of his mouth. 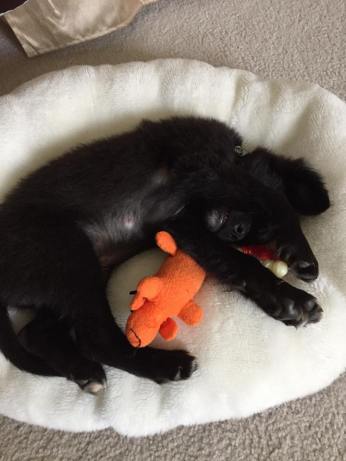 A perfect example of the little furry time-sucker: I wrote the first draft of this post three weeks ago.

Despite all that, Chuck is pretty cool. We know we’ll get through this and he’ll end up being a treasured part of our little pack. Until then – wish us luck. We’re going to need it!

14 thoughts on “What the Chuck Were We Thinking?”