I’ve been wanting to post about the total eclipse, but I’ve been stuck. It happened a week ago, and although I’ve started writing about it a few times, the post just hasn’t been coming together to convey what I wanted to say. After some reflection, here are my thoughts on the experience…

A few weeks before the event, I wrote a somewhat sarcastic account of the anticipation and preparation surrounding it.

Don’t get me wrong – I was excited to experience the phenomenon first hand. Since we live so close to the path of totality, it was a no brainer that we’d take a drive to see it.

Now, after it’s all over, I’ve had some time to think about what it meant to me.

Just as every Tom, Dick, and Harry added to the hype, they have also put their two cents in with follow ups. You’ve no doubt seen the news coverage, heard the accounts, and seen the photos. I don’t feel I can add much to that aspect of the event.

What I can tell you though, is how it felt. It felt like seeing the Grand Canyon the first time, when I couldn’t stop saying “WOW!” over and over. (I really wax poetic sometimes, don’t I?!)

In short, it was something I will never forget.

Despite the snark and skepticism of my previous post, as the day approached, I couldn’t help but catch Eclipse Fever A friend from the Chicago brought her seven and nine-year old daughters down and stayed at our house. My mother-in-law was in town to visit my stepdaughter, and Mr. Maid and my son-in-law took the day off work. Together, after a breakfast of Eclipse donuts from Krispy Kreme, the eight of us packed a picnic lunch and set out for our viewing location in Sparta, Illinois.

With the throngs of people expected to descend on the region, we were happy to find only six others (all people we knew) at our destination.

Excitement hummed in the air around us, but no one was completely sure what to expect. The sky was clear and blue, despite an iffy forecast that predicted clouds and possible rain. We passed the time eating fried chicken and drinking Schlafly Eclipse beer. The kids played Washers and Uno while we waited.

Then the moon started its voyage from right to left across the sun. We adjusted our eclipse glasses and figured out how to use our old-school cereal box projectors. Facts and figures were discussed. Old wives’ tales were shared. We marveled at the confusion and fear ancient civilizations would have felt, in absence of our modern knowledge.

“Gravity is going to change and if you jump, it’s gonna take longer to land,” insisted the seven-year-old.

“That may be true, but it will be too small to notice,” one of the grownups said.

It seemed to take a long time for things to change. We’d peer up through our glasses, making jokes about blinding ourselves. Sharing memes we’d seen on our cell phones. 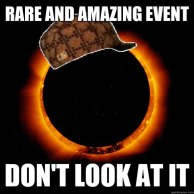 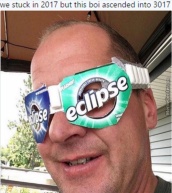 Then, it started to get real. There was a noticeable drop in temperature. The light became muted, sort of like when a storm is working its way into the atmosphere. After a little while, someone noticed that it was getting quiet. The cicadas had stopped their incessant buzzing. The birds had been making their usual sounds in the background, and we hadn’t really noticed them. But when they stopped, their absence couldn’t be ignored.

As the sliver of sun became smaller and smaller, the shadows started to deepen. A phenomenon I had been excited to see began to occur. The glow of a false sunset was visible in every single direction around us.

We stood or sat in lawn chairs, transfixed, as less and less of the sun was visible. First a crescent. Then a fingernail. An open parenthesis.

And then… we were staring up at complete darkness.

Around me, there was clapping and whoops of joy. I stood for a moment, mouth open, gaping through my glasses into the blackness where the sun was, just a moment before. For a split second, I just stared, not quite wrapping my brain around what I was seeing, or I should say, not seeing.

As I did, I looked in wonder at the incredible sight of the corona. We also looked at each other – grinning – jumping up and down (to see if it really took longer to drop) – hugging.

I was not moved to tears, but I was most definitely moved. I got chills as every hair on my body stood on end. I felt a little disoriented. I felt awestruck. I was brought face to face with the enormity of our universe and the tiny speck that I am – that we all are – in relation to it.

At our spot on the path of totality, the darkness lasted just under two and a half minutes. It felt like 30 seconds. It was almost too much to comprehend and take note of. We pointed out Venus and Jupiter. Talked about “Bailey’s beads.” As promised, we saw the diamond ring effect.

Soon – way too soon, the close parenthesis of sunlight started to appear, and we hastily put our glasses back on. After experiencing totality, the rest of the show was somehow not quite as big a draw. We looked up as the moon moved on its way, but we didn’t look as often or for as long. The main event was over, and everyone knew it. There was a sense of “did that really just happen?”

And gradually, the sun began to come back into view.

All photos of the eclipse, courtesy of my friend and fabulous photographer, Di Winson.

The sky lightened as the faux dawn started. The birds and bugs resumed their usual daytime repertoires.

We toasted what we had just seen by sharing Moon Pies, then started cleaning up our picnic. Those who had long journeys home packed up their cars to get on the road.

As I’ve had time to absorb the experience, I am even more awestruck, if that’s possible. I didn’t cry when the sun went out, but as I watched TV later that evening, seeing others’ reactions across the country, I started to get emotional.

I cried as I felt the enormity of seeing something I may never see again, with the people I love the most on this earth. I can honestly say I will remember it for the rest of my life.

I cried as I thought about my Dad. Had he been alive, he would have been there with us, geeking out even harder than the biggest geek in our group. I miss him and can imagine his delight.

I cried as I thought of the divisions in our country. There was such a sense of coming together for this celestial event. We all share the same sun and moon – no matter our race, religion, or political views. I wish those at odds could remember that.

Later in the evening, Facebook was flooded with pictures posted by my talented photographer friends. There were eclipse memes both hilarious and poignant. There were a few disappointed posts by people who were not able to see what they had hoped of the eclipse.

And then there it was… an ugly post about politics.

I knew it was inevitable, but I wept anyway. This time I cried for the memory of one afternoon in August, when we were all on the same side.

6 thoughts on “Totality Was Totally Worth It”