Skip to content
HomeThe Maid Goes to Maine: Part 8 – The Battle of The Bubbles

You’d think that after 50-some years on this planet, I’d have learned to go with the flow. Sometimes a detour, a mistake, or a miscalculation can result in something much better than what was originally planned. The universe tried to teach me that lesson again during our vacation in Maine.

We had planned to do some hiking at Acadia National Park after enjoying the views from Cadillac Mountain, but had to cancel when a storm came through. So, the next day, Mr. Maid and I were going to devote most of our day to hiking a few of the trails in the park.

A few years ago we started buying “Best Easy Day Hikes” books from Falcon Guides for our destinations. We’re a bit more advanced than the term “Easy” would imply, but by no means are we experts. Our daily life and our local terrain don’t give us much opportunity to get in tip-top hiking shape. Day hikes of no more than five or ten miles at a time are sufficient for this pair of old geezers with our creaky knees and aching feet. The most strenuous hikes in the “Easy” guides are usually, to steal a line from Goldilocks, “just right.”

Mr. Maid chose the Bubbles Divide Trail to start with. At only one mile out and back, it would be a nice warm up to get the day started. Bubbles was one of my favorite characters on the TV show The Wire, so it had to be good, right? Wait a minute. Bubbles on The Wire was a miserable heroin addict who was often on the verge of a tragic death. (Foreshadowing?! – Nah! What could possibly go wrong?)

Up until now, being in Maine before busy season had worked in our favor. Not this time. When we got to the trailhead parking lot, not only was it full, but cars were crammed into anything that even remotely looked like a parking spot, legal or not. There is no parking allowed along the Park Loop Road, and we had seen park rangers issuing tickets, so we drove on to our next option – a roadside turnoff that was only about a quarter mile away from the main parking lot. This of course was packed too. Our only option at this point was to go about a mile and a half further down the road and park at Jordan Pond House, which with two large lots was sure to have a spot available.

Jordan Pond is an oblong lake seated at the foot of the hills that contained the mountains known as North and South Bubble. Bubble Rock is on South Bubble and is known as a “glacial erratic” – a huge boulder left behind by a glacier eons ago.

We were now at the far end of the lake, more than a mile and a half away from the start of our chosen trail. We decided to make the best of it and incorporate Jordan Pond Path into our route. Consulting our maps, we saw that the Path was a 3.3 mile loop around Jordan Pond – we could trek up the east side. From there, we could see the South Bubbles Trail connecting Jordan Pond Path with Bubbles Divide Trail, where we intended to go in the first place. Congratulating ourselves on our map reading skills and ability to adjust when things didn’t go our way, we shouldered our day packs and set out.

Jordan Pond Path turned out to be well worth the detour. Meandering through a forest of pine along the shore of the lake, it was a mostly flat, even track. Walking in and out of the sun and shade, the smooth lake glittered to our left. All in all, quite a nice way to start our morning.

We completed that leg of our journey quickly. Easy peasy. At the north end of Jordan Pond we found our connecting route to Bubbles Divide. We knew our approach would climb the side of the hill, but we expected it to be somewhat gradual with switchbacks and flat patches. We were wrong.

The trail proceeded to climb to the 768 foot summit by the most direct route – straight up the side of the mountain! The path quickly steepened and went from pine needles to gravel to large rocks to boulders.

I had flashbacks to family vacations when I was convinced my Dad was trying to kill me and leave me for dead in the woods. He would lead us on hikes where we would invariably come upon something that terrified me. We’d have to cross a rushing water on a fallen tree whose bark had long been worn away to the shiny wood beneath, or by stepping precariously across smooth slippery rocks. Or our route would include a section about three inches wide atop a cliff where one misstep could have me plunging to my death. I distinctly remember a trail somewhere in Indiana where we had to climb iron ladder rungs that had been drilled into a sheer rock wall. The only way I could be coaxed into doing it was the promise that the trail was a loop and we wouldn’t have to come back down. I’m not calling my father a liar, but we did, indeed, have to come back down that way. As he was a former Boy Scout, scout leader, and lifelong outdoorsman, I found it really hard to believe that he “must have lost the trail” as he claimed.

So, Mr. Maid and I scaled the side of the mountain without any special equipment, but with plenty of cussing and whining on my part. I am not as afraid of heights as I once was, but I am afraid of falling several hundred feet onto jagged pink granite rocks and ending up a crumpled, bloody heap of broken bones. So sue me.

We were very fortunate that the path was marked here and there with small blue paint swatches, because it looked as if Mother Nature had lost a giant game of Jenga and left the pieces where they fell. When I had thought about packing my hiking poles, I had told myself “you won’t need them – this is Maine, not the Rockies – the hiking will be no big deal.” I luckily found a branch to use as a walking stick to help hoist myself upward. That is when it wasn’t so steep that I had to use my hands as well as my feet to find purchase. There is no photo evidence, so I am prepared to deny it, but there may have been a few times when Mr. Maid had to give my fat ass a boost up a few particularly steep crevasses. All the while, I chanted to myself “don’t look down. Don’t look down.”

When we finally reached a perch where I felt comfortable enough to finally look, the view was breathtaking. We took a short rest and continued on to the South Bubble.

Finally reaching the Bubbles Divide Trail, we saw hikers who were lucky enough to find parking practically skipping along, no doubt wondering why Mr. Maid and I looked so sweaty and disheveled. “You don’t know what we’ve been through!” I wanted to shout. “My husband and I just risked our f-ing lives climbing up the f-ing side of the f-ing mountain while you weaklings took an amateur stroll in the woods!” If I wasn’t panting so hard I really would have given them a piece of my mind. 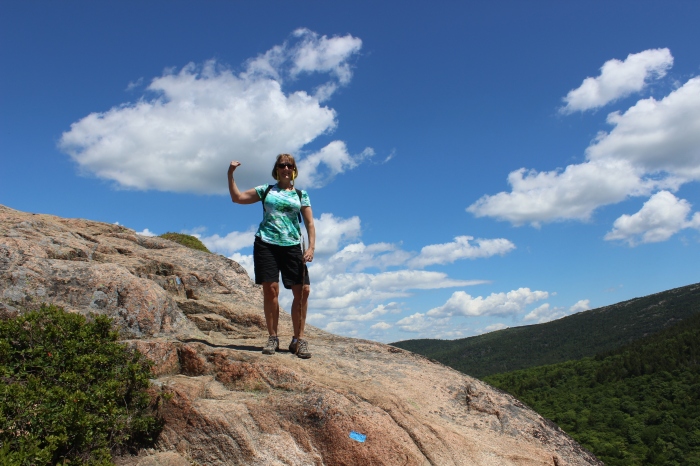 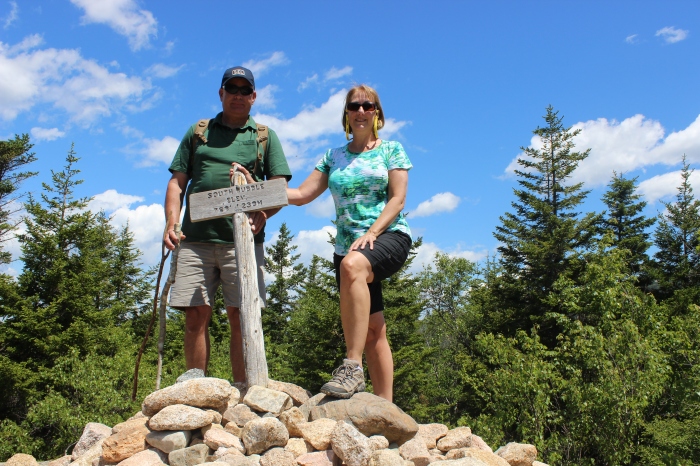 After the obligatory photo ops at the South Bubble, we figured what the hell – we may as well go the extra mile or so to the North Bubble at an elevation of 872 feet. Our efforts were rewarded with more spectacular views.

With both Bubbles under our belts, it was time to figure out how to get back down. I told Mr. Maid in no uncertain terms that we were NOT going back the way we came. Climbing up is one thing, when you can stare at the rocks in front of your face and refuse to think about the rock face beneath you – it’s another to have to face it going down. Luckily, we could take the Bubbles Divide Trail in the opposite direction from the parking lot back down to the shore of Jordan Pond. It was steep and filled with boulders too, but not nearly as treacherous as our upward route.

Once finally back at sea level and feeling like rock stars (no pun intended,) we figured we may as well head around the longer, west side of Jordan Pond. We had cheated death after all – what was a longer walk now that we were firmly back on even ground?

Instead of an hour, our little jaunt up to the Bubbles took more than four to complete. And the crazy thing is, I would do it again in a heartbeat. Mr. Maid and I agree that it was one of the most fun and memorable hikes we’ve completed. Who would have thought that not finding a parking spot would lead to such an adventure? But that’s part of what makes it special. If the parking gods had been more favorable, it may never have happened.

Grubby and exhausted, we sat down at the Jordan Pond House for lunch and their world famous popovers. I paused to reflect on what I’d just done. I felt pretty darned proud of myself. I’d challenged myself and faced my fears. I proved that my aging body was still strong and could carry me wherever I wanted to go.

Most of all, I once again was reminded about taking the “road less traveled” and finding beauty and joy even when things don’t go my way. Go with the flow – you might just go somewhere you’ll never forget.

17 thoughts on “The Maid Goes to Maine: Part 8 – The Battle of The Bubbles”